This recipe is meant to emulate the same characteristics that are found in the Mionetto Treviso DOC Prosecco; Light, airy, and refreshing. The vodka is used to balance the drink, and increase its ABV to make the flavours pop. The honey and tonic marmalade is meant to pair with the golden apple note of Prosecco, and be intertwined as a bitter syrup. I used marscapone cheese as an emulsifying agent, that lends itself beautifully with the white peach flavour of the Prosecco. Then finally, lavender infused peach bitters to improve the fruitiness and floral nature of the drink.

Poem:
I reminisce, I miss
That peachy complexion
Those honeydew lips

I reminisce, I miss
That straw coloured hair
Those wind swaying hips

I reminisce, I miss
That time we shared
Our first lavender kiss

I wanted this cocktail to be 100% inspired by the Mionetto brand. I learnt about the history, and their “design del gusto,” as well as a deep dive into the flavour profile of the sparkling wine. The ingredients in the cocktail were all meant to feature and expose the Prosecco in all of its elegance, just in a new light. Much like Mionetto collaborates with their grape growers, I wanted to collaborate with an artist to create a perfect “Mionetto Piece.” With my first taste of Mionetto, it presented itself light, airy, and refreshing, much like an early love or ‘first kiss.’ I reached out to a local poet to help me create a gift that expresses the love and butterflies associated with this, that also represents my cocktail. With all of this being considered, my cocktail is light, airy, refreshing, and represents all the love and bright character that Mionetto inspires. 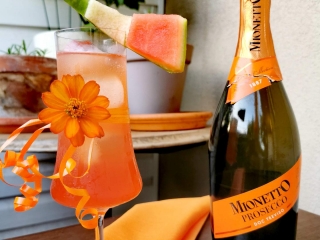 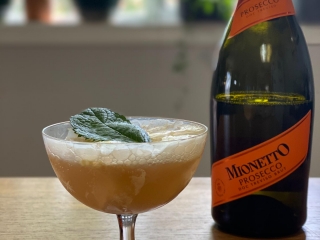